Chairman of the Agreenium Strategic Advisory Board 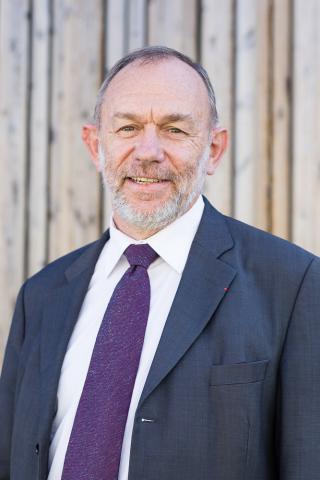 Guy Fradin was elected Chairman of the Agreenium Strategic Advisory Board on 6 June 2016.
Guy Fradin, Honorary General Engineer with the Corps of Bridges, Waters and Forests, has responsibilities within various national and international institutions: Chairman of the Board of Directors of the Agence de l’eau Rhin-Meuse, of the Board of Directors of the Ecole nationale du génie de l’eau et de l’environnement de Strasbourg, Treasurer of the World Water Council, General Secretary of the International Water Resources Association and member of the international committee of the Bureau des recherches géologiques et minières (BRGM).
Guy Fradin’s career has been in the Ministries of Agriculture and Environment, where he held the positions of Bureau Chief (1982/1989), Assistant Director (1989/1992) and Deputy Director (1992/2000) before becoming Regional and Interdepartmental Director of agriculture and forestry in the Ile de France region and Director General of the Agence de l’eau Seine-Normandie.
In 1997, he was appointed Assistant Private Secretary to the Minister for Agriculture, Philippe Vasseur, and in 2003/2004 Private Secretary to the Minister for Ecology and Sustainable Development, Roselyne Bachelot. He was governor of the World Water Council (2004/2012) and Vice-Chairman of the 6th World Water Forum in Marseille (2012).
Guy Fradin is an agricultural engineer, a graduate of the Institut national agronomique (1970) and the Ecole nationale du génie rural, ses eaux et des forêts (1974).